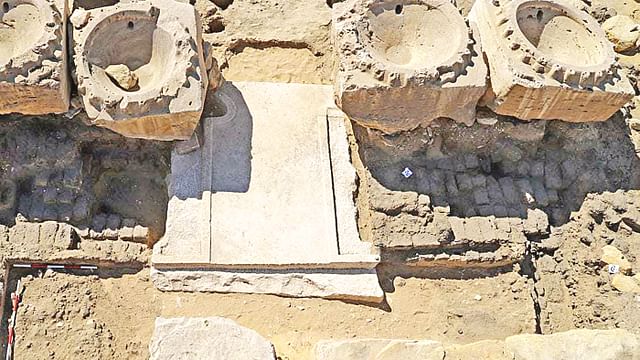 Archaeologists have unearthed a four-and-a-half-thousand-year-old Sun Temple in Egypt. They think it is the most important discovery in Egypt in decades. Massimiliano Nuzolo, an assistant professor at the Polish Academy of Sciences Institute for Mediterranean and Oriental Culture and co-director of the mission, made the announcement. Earlier, Pharaoh rulers in Egypt found two more sun temples. This is the last search for a third temple in about 50 years. Archaeologists consider this to be the greatest discovery.

According to a BBC report, it is thought that the ancient rulers of Egypt built only six Sun Temples four and a half thousand years ago. Archaeologists are still struggling to gather enough evidence before reaching the final conclusions about the location of the Sun Temple. Inside the temple there is space like a huge courtyard. In addition, there is a huge tall pillar inside. The pyramids built in ancient times in Egypt highlight the dignity of Pharaoh rulers. Although the Sun Temple is a smaller structure than the Pyramid, it is also considered important.

Archaeologists have uncovered what they believe to be one of Egypt’s lost “sun temples,” dating from the mid-25th century BCE.
The team uncovered the remains buried beneath another temple at Abu Ghurab, around 12 miles south of Cairo, mission co-director Massimiliano Nuzzolo, an assistant professor of Egyptology at the Polish Academy of Sciences’ Institute for Mediterranean and Oriental Cultures in Warsaw, told CNN on Monday.
In 1898, archaeologists working at the site discovered the sun temple of Nyuserra, also known as Neuserre or Nyuserre, the sixth king of the 5th dynasty, who ruled Egypt between 2400 and 2370 BCE.

Now discoveries made during the latest mission suggest that it was built on top of the remains of another sun temple.
“The archaeologists of the 19th century excavated only a very small part of this mud bricks building below the stone temple of Nyuserra and concluded that this was a previous building phase of the same temple,” Nuzzolo told CNN in an email.
“Now our finds demonstrate that this was a completely different building, erected before Nyuserra,” he said.
The finds include seals engraved with the names of kings who ruled before Nyuserra, which were once used as jar stoppers, as well as the bases of two limestone columns, which were part of an entrance portico, and a limestone threshold.