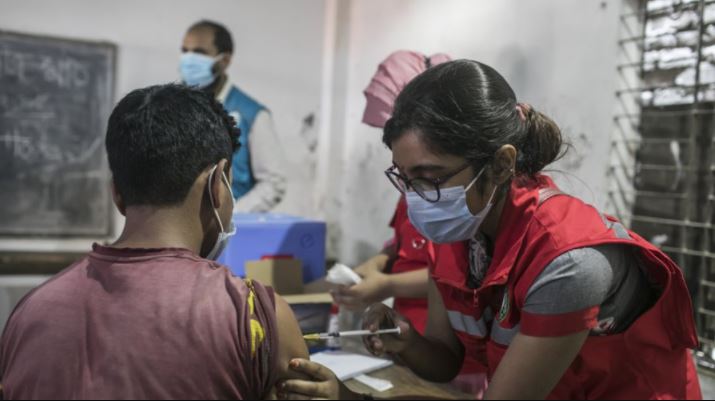 The coronavirus booster dose vaccine program is being piloted in the country from today (Sunday, December 19). Initially, this activity is being started by some of the media workers including doctors, nurses and those in their sixties. Pfizer vaccine is prescribed for booster doses.

Department sources said there were no specific instructions for choosing Pfizer as a booster dose. The Department of Health has decided to vaccinate Pfizer in view of the fact that Pfizer is being vaccinated as a booster dose in most countries of the world.

The new variant Omicron has interrupted the relief that coronavirus outbreaks have reduced worldwide. The new species is spreading around the world at an unusual rate. The World Health Organization (WHO) has described Omicron as a “variant of concern” but did not say whether those identified in Omicron were seriously or abnormally ill.

About 15,000 Omicron variants have been identified in the UK alone. The Boris Johnson government is pushing for new restrictions to prevent infection. Meanwhile, the French prime minister warned on Saturday that Omicron was spreading at lightning speed in Europe. According to the news agency Reuters, the infection in the local Omicron variant has increased one and a half times in three days, according to the World Health Organization (WHO). Omicron strain has been found in 69 countries around the world so far.

The committee said that more than 24 per cent of the people in the country have been given a second dose of the vaccine, while the nightmare does not understand the rationale for giving a booster dose.

If you want to know about the booster dose, Additional Director General of the Department of Health, Prof. Ahmedul Kabir told Bangla Tribune that booster dose is being given from December 19. However, he did not know how many people would be vaccinated on the first day.

“It simply came to our notice then. But Sunday will be given to very defined people. There will be doctors, nurses and health care providers; Similarly, the front liners will be in their sixties, including journalists. ‘

If you want to know when the booster dose for ordinary people will start. Ahmedul Kabir said, “After giving on Sunday, the instructions will go to every vaccination center.”

But the immunization program in the country started with Kovishield invented by Oxford AstraZeneca and created by the Seram Institute of India. This vaccine has been given to more people in the country. They will also be given booster with Pfizer vaccine.

In this case the vaccine is being given on the basis of mix and match (first and second dose one company and subsequent vaccine another company). But when India bans the export of the Covishield vaccine, millions of people are waiting for the second dose with the first dose of the vaccine.

The issue of mix-match ticker was first discussed then.

Asked what was the basis of the decision to mix-match vaccine now, Professor Ahmedul Kabir said, However, these studies are still ongoing.

‘Omicron is running now, more variants are coming. It is being thought around the world to give booster doses with any one vaccine to those who have already lost antibodies. If their antibodies do not rise, they are more likely to be infected, “he said.

Asked about the WHO’s recommendation, the doctor said, “The World Health Organization (WHO) recommends research after all these things have happened. But if they sit in the hope of this recommendation, people will die. So now we have to do what the developed countries are doing. ‘

However, our very strong pill nightag with vaccines. He said the decision was taken in consultation with Nightag.

But booster doses are being given in different countries of the world whose huge population has come under full dose of vaccine, it has not happened in our country yet. Asked, he said, At the same time, regular activities of Tika should be continued in parallel.

When asked when Nitag decided to give a booster dose, the committee member and former director of the health department, Prof. Dr. Bay-Nazir Ahmed told the Bengali Tribune, “Nightag has not changed, you are the same as before.”

However, it has been said that if you want to give a booster, it can be given in this process.

Asked if the decision to give booster doses was taken by the health ministry, he said, “First of all, booster is being given in other countries. Second, since people are now reluctant to take the first dose of the vaccine, there is an issue with the expiration date of the vaccine.

Items And Fruits To Blood Purify

Adult Literacy Jobs – Are You Interested In A Career In Remedial Education?