Google has reportedly told employees that those who fail to comply with company vaccine policies will ultimately lose their jobs.

An internal memo, obtained by CNBC, told staff that they must upload documents proving vaccination status.

Those who did not would be placed on unpaid leave and later sacked, it said.

Google has been pushing for an eventual return to the office – which has been repeatedly delayed – and expects those attending buildings to be vaccinated.

When contacted by the BBC, Google did not deny the accuracy of the US news channel’s report on the leaked internal memo.

A spokesperson said: “As we’ve stated before, our vaccination requirements are one of the most important ways we can keep our workforce safe and keep our services running.

“We’re committed to doing everything possible to help our employees who can get vaccinated do so, and firmly stand behind our vaccination policy.”

CNBC’s report said the memo, sent earlier this year, told employees they had until 3 December to send Google proof of vaccination or to apply for an exemption on medical or religious grounds.

Those who did not do so by 18 January next year would be put on “paid administrative leave” for 30 days, the memo said, followed by unpaid leave for up to six months.

After that period of “unpaid personal leave” they would lose their jobs.

Compulsory jabs
The approach to office working is mixed among the tech giants, and complicated by US regulation and a quickly-changing scenario.

The US Occupational Safety and Health Administration has told all employers with 100 or more staff that they must make sure each of their workers is either vaccinated or tested for Covid-19 once a week – a move that Google has indicated would cover almost all roles at the company.

That was due to come into effect on 4 January, but was quickly challenged in court, and has been suspended pending a court ruling.

However, Google said in July that anyone working in the office should be vaccinated, not just tested.

Those who have – or are able to find – a 100% remote-working role are not affected by the rule.

But it has also said that it expects most employees to be in the office for at least three days a week, rather than continuing to work from home. It has also said it will cut pay for US employees who continue to work remotely.

Other tech firms have taken a different approach.

In May, Twitter said staff could work from home “for ever” – with some caveats about suitable roles.

The following month, Facebook followed suit, saying employees could request to continue to work from home after Covid rules were lifted. Microsoft has also made remote work a permanent option.

Apple, like Google, has said it expects employees to be in the office at least three days a week – a move that resulted in strong resistance from some employees. 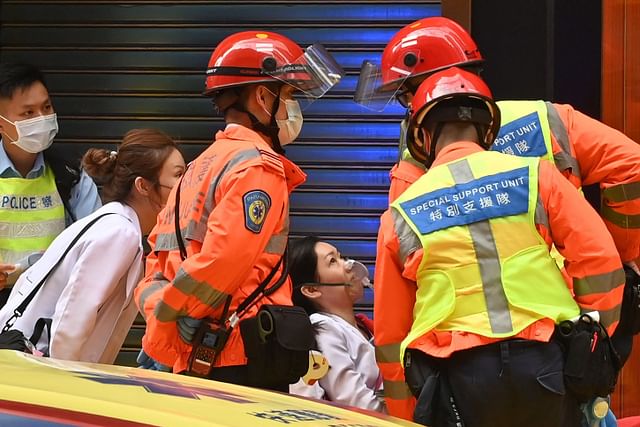 Fire at the World Trade Center in Hong Kong, 300 trapped