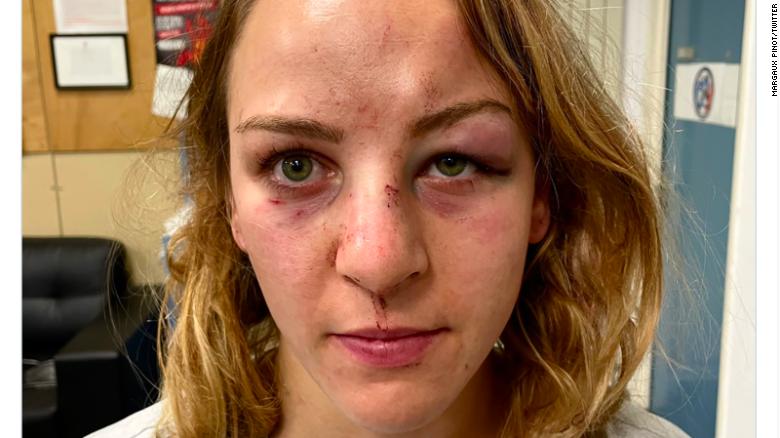 Margaux Pinot, a judoka with the French national team, plans to appeal a decision by a Paris court to not pursue a conviction against her partner, whom she accuses of domestic abuse, her lawyer Rachid Madid told CNN on Friday.

Pinot, an Olympic champion, made headlines in France this week after she posted pictures of her bruised face on social media.
She held a press conference accusing her partner and judo coach Alain Schmitt of attacking her.
Pinot was bewildered a Bobigny court didn’t allow the case to proceed against him.
“I thought I was dead, I managed to escape to take refuge with my neighbors who immediately called the police. I have several injuries including a broken nose and 10 days of Temporary Interruption from Work,” wrote Pinot in a tweet.
Schmitt,​ who has been training Pinot for four years, told BFMTV that they have been “in a very complicated relationship” for two years.
“A lot of people know about it … It is hard to determine when we are or when we are not together, it breaks so often, it comes back,” he added.
Speaking to CNN on Friday, Madid said he ​was “shocked” by the court’s decision.
“I am stunned by the decision that was handed down at first instance since, in a way, the evidence was gathered to lead to a conviction,” added Madid.
Schmitt appeared on CNN affiliate BFMTV on Friday with bruises on his face, refuting the allegations made by Pinot and accused her of lying.

“There was not one punch, not one kick,” he said. “She says she did not put her hands on me, that means that I was punching her and that she did not put her hands on me, are you serious?”
However, in Pinot’s press conference, she said she did not even try to defend herself and tried to calm him down.
“I tried to stop him, I said, ‘Alain, stop, stop.’ I did not even defend myself, I tried to calm him down, to stop him.”
Pinot’s lawyer Madid said that in court, Schmitt had “skillfully” insisted on points “more related to the personality of the complainant, my client, than on the conditions in which their story played out.”

Madid added ​he planned to refocus the debate in court when an appeal is heard in the coming months.
Malik Behloul, Schmitt’s lawyer, commenting on BFMTV this week, said that it was not possible “to tell who hit who​m, (and) ​the doubt is to the advantage of the accused and so he must be released.”
CNN could not reach Behloul for comment.
The court of Bobigny released Schmitt based on the lack of sufficient evidence, according to BFMTV.

The prosecutor of Bobigny, Eric Mathais, told CNN that the public prosecution was also appealing the court’s decision as is allowed in the French legal system.
“The defense supported the acquittal, the prosecution requested a conviction, the court ruled in favor of the defense, we are appealing,” Mathias wrote in a tweet.
On social media, supporters of Pinot expressed “sadness” and “anger” over the decision to release Schmitt.
Violence against women in France has risen to the fore in public debates in recent year​s, with much media attention focused on the dozens of women killed by their partners each year. ​
In 2020, security forces reported 159,400 victims of domestic violence committed by partners (or former partners), according to the country’s interior ministry, an annual increase of 10% that includes 139,200 women.